KDE 4.2 is set for release on January 27th. Eager to see what is new and improved, I installed beta 1 on my Gentoo box. KDE 4.1.80 was tagged then released late last month after the feature freeze deadline. This is a snapshot of the current development tree that will eventually be released as KDE 4.2.

A quick blurb about KDE 4.1:
Busy with other things, I never wrote about KDE 4.1 on Gentoo. I've been using KDE 4.1 since 4.1.1 with the kde-testing overlay which has since entered portage and been bumped to 4.1.3. This is a good release and well worth at least testing if you are a KDE user. I've found it to be quite stable and use it exclusively for every day work. The Gentoo KDE team has done an excellent job creating ebuilds for it.

Plasma received a lot of polish and is beginning to eclipse Kicker and indeed all other desktop and panels that I have used. Much needed features such as changing the panel height, auto-hide, and screen edge selection have been added. The task bar is highly configurable in typical KDE fashion, allowing you to define task grouping, sorting, filtering based on current desktop or screen or minimized windows only, as well as allowing manual grouping. The system tray also now allows hiding of unwanted tray icons.

Here's a screen shot cluttered with various plasmoids for demonstration. It's nice to see the community thinking up some fun and useful plasmoids. 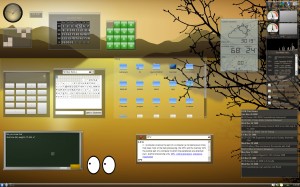 I wasn't the biggest fan of the KDE 4 default menu. Luckily, the Lancelot menu has been accepted upstream and is now an option on stock installs. This menu is great for finding new applications (esp. new users) as well as thumbing through with the keyboard. 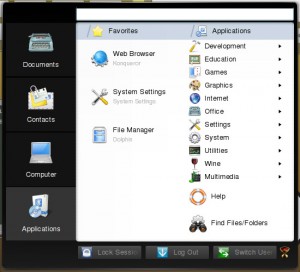 I'm a Firefox user, but occasionally will fire up other browsers for testing or to avoid restoring a large previous session if I am in a hurry. I'm happy to say that Konqueror feels much faster. It also seems to work much better on AJAX heavy sites such as Facebook. When I spoofed the user agent to report Firefox 2, Facebook chat worked fine, an improvement from 4.1. The continued merging of Webkit is clearly beneficial here.

One of my favorite KDE apps from 3.5, Ark, is also finally reaching feature parity. I missed shell integration with Dolphin/Konqueror quite a bit and am happy to say it has returned. 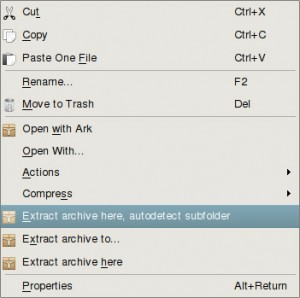 Notifications are displayed and stack nicely in the lower right corner. Operations such as downloading and moving files will show their status here.

Kontact gained usenet support by means of Akonadi, which now has support many for data sources. I think I will switch from Thunderbird/Lightning to Kontact with this release. 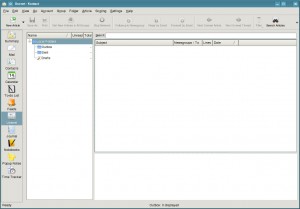 Kate has a new VI editing mode. This is quite a nice text editor. 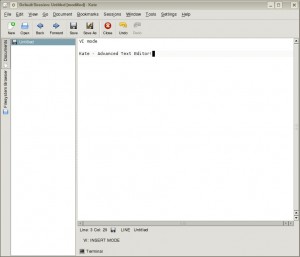 Amarok is shaping up as well. This is 2.0 RC1, so it should be released on a date close to KDE 4.2. Take a look at the different Internet media sources. Last.fm support is now top notch! 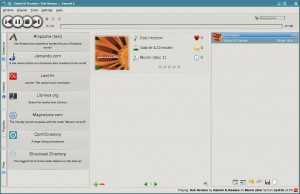 Digikam 0.10-beta5, which seems to be stabilizing and evolving nicely, is another nice app. Bonus points if you can identify all the retro machines. The one on the left was probably the worlds first "green" PC. 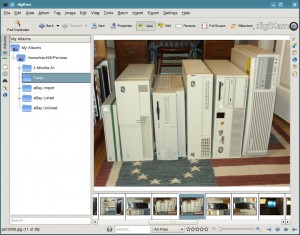 Okteta, an easy to use hex editior, has also been updated. 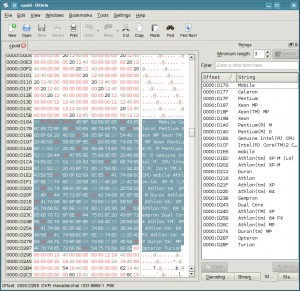 I could go on and on showing the great progress. I hope I hit the highlights, but you can check out the feature plan for yourself here: http://techbase.kde.org/Schedules/KDE4/4.2_Feature_Plan. Noteworthy changes include improved multi-display, better desktop search with Strigi, and integrated power management.

First, a shout out to the Gentoo KDE maintainers and testers. Creating ebuilds for fast moving snapshots and live sources for a project this large is not an easy task.

Installation on Gentoo is fairly easy if you have layman. 'layman -a kde-crazy' will add the KDE crazy overlay which has KDE 4.2 unmasked and ready for testing. If your box is ~arch, it should be as simple as 'emerge -av @kde-4.2' (see comments below for more info). I recommend using the kdeprefix USE flag if you wish to test development releases so you can fall back to stable if things aren't working correctly. This will slot 4.x releases.

If you want a stable and usable environment, I still recommend sticking to 4.1.3 at the moment. If you run a mostly stable Gentoo with KDE3.5, you can find a package.keywords file in the kde-testing overlay as well as some other minor goodies. These versions slot effortlessly so it isn't a problem switching back and forth.

KDE 4.2 has come a long way since 4.0 and is a nice steady improvement over 4.1. As I stated earlier, I use KDE 4.1.3 as my only desktop environment and am extremely pleased with it. I have had no major issues and have had uptime of over a month in the past without crashing/restarting KDE - so the good old KDE 3.5 stability seems to be returning. By trying the current beta out, I have no doubt that 4.2 should be just as stable by release.

Also, if you are an Nvidia user you owe it to yourself to try the latest 180.xx+ drivers. As people have long been saying, much of the performance problems they were describing were related to Nvidia cards and poor video drivers. With the new drivers, KDE is lightning fast.