I define retrocomputing [wikipedia] as the collecting and use of old computers. Why might one do this? Well, for one, enterprises cycle out machines fairly frequently. 2,3,4 and 5 year old systems are often sent out to scrappers in droves despite still being plenty useful. Top of the line systems for large companies often have more than enough power for small and medium sized ones at pennies on the dollar compared to new hardware. These machines are likely complete overkill for home use, but none the less are very useful for fun and learning.

IBM mainframe ops in the 1980s

A lot of what I know about computers has been learned on old machines. Hooking up a couple of servers and desktops and trying to make something useful out of them is a great exercise for the aspiring system administrator. With open source software, it can all be done freely and easily.

Yes, you can run Linux, BSD, and Solaris from the comfort of your Windows desktop in a virtual machine (weak sauce...). Yet there is something much different when you cluster several high technology servers together, tethered to a Fibre Channel storage array and have them share a single distributed file system. The knowledge of setup, installation, and troubleshooting I've gained from mock scenarios like this I cannot compare to anyone else I've ever met. Breaking things here usually means digging deep and fixing it. If you were to screw something up at work like some of the things I've gotten into, it would probably cost you your job. 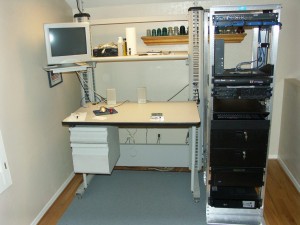 Retrocomputing is also fun. I am personally into old IBM hardware, though old UNIX workstations of all sorts are interesting to me. You can see my collection of IBM PS/2 and RS/6000 knowledge here: http://ps-2.kev009.com/. There is a particular thrill to booting up a machine that cost between $20,000 and $50,000 10 years ago. Knowing that these same machine models were used to design the Boeing 777, composed the famous Deep Blue machine, and were used in the largest automotive and shipbuilding firms not to mention some of the most important space craft to date also brings a sense of power and nostalgia. In some ways its similar to having a classic car, but different. Maybe if that classic car was a big ass bulldozer, tank, jet or some other well engineered piece of equipment :-P. 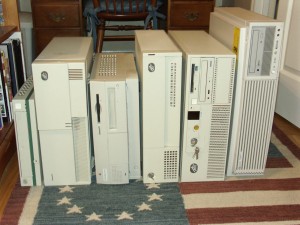 Nostalgia is one of the biggest things I get out of using particularly old hardware. I missed the mainframe days, the minicomputer days, the PC and DOS days, the Apple II days (well, actually I used these a bit at a very young age), and to a degree the early Windows days. Just like a history class, studying these old machines gives me insight as to why things are done the way they are today. It gives me appreciation for modern systems and makes me write clean and well optimized code. The old computer games that captivated me as a child (Sim City, Sim Tower, Sim Ant, Sim Farm, Gizmos and Gadgets, The Incredible Machine, Oregon Tail etc.) implanted a high degree of logic and understanding at a young age and it is heartwarming to revisit these. I grew up a Mac user as well, so seeing what I was(or: was not :>) missing on PCs is also interesting.

Some of the benefits of retrocomputing:

It is interesting that we as humans produce such elaborate machines, only to discard them as scarp a few years later. It is humbling and shows you the incredible progress we are making.

eBay is your friend, but also look for local scrapyards or businesses doing overhauls.

If you are faint of heart, plenty of good abandonware sites exist for games and operating systems that can be run on emulators or VMs. Check out this IBM mainframe emulator, Hercules. Some of the original IBM OSes are public domain.

If you don't want old PCs and big iron overtaking your house, there is plenty of good material on YouTube as well. The Computer Museum is a good start. Some of the consoles, offices, and outfits are hilarious.